I thought it would be fun to showcase the way a Supper Club menu is put together. My Friend Rusty asked me if we could accommodate eight guests for her birthday, so with the help of my technical adviser we built an extension to the existing dining room table. We decided on the menu: (Click menu to view larger) 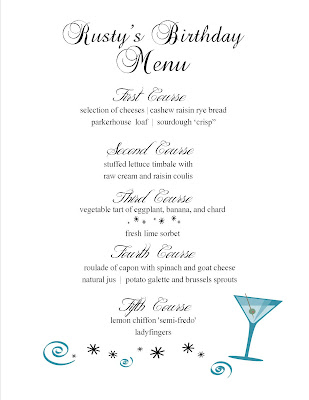 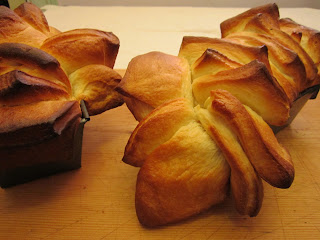 ﻿      We start with a cheese course and a selection of my breads. I always go to Murry's Cheese on Bleeker Street in Greenwich Village. This time around I got Shropshire Blue, Vendeen Bichon, Raclette, and Brilliat Savarin. Shropshire Blue Cheese is a bright yellow cow's cheese from Shropshire England. It is dense and creamy with an intense but sweet flavor. Vendeen Bichon, also a cows cheese made in France is what Murry's carries in place of the wonderful  Tomme de Crayeuse which I love. It is mushroomy, clean and rich even though Tomme style cheeses are generally made with milk from which the cream has been removed. Raclette is an Alpine cheese also of cows milk that is slightly stinky, but still sweetly reminiscent of a Pont l'Eveque and Brilliat Savarin is one of the greatest triple creams ever and is also produced from cow's milk. Yes, I know that conventionally one serves a sheep, a goat and a cow's milk cheese but I don't care. These are all cheeses that I love, my philosophy being that you will come to love them as well. In my own defense I also served a little amuse bouche plate with a crispy ginger flavored cracker which I baked in the shape of a flower, filled with a quenelle of herbed goat cheese. In addition the plate had a confit of figs which my neighbor Rosalie gave me at the end of the season, and a nice puree I made from poached pears in red wine and herbs. The pears were also given to me by a friend who has a pear tree in her yard which produces French farmhouse quality pears. ( Go Jersey City! )  The puree was made from the scraps and pieces that I saved from cutting up the pears for various purposes, as I could not bear to just throw them out. I always save the different syrups and relishes, preserves and preparations so that when I throw a dinner party, they are already at hand. This makes any given event more special, and the work is already done. I piped some mascarpone cheese onto the plate and in between I put purees of red and yellow peppers, respectively. 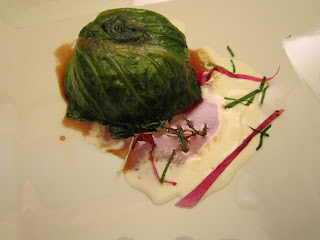 The Second Course was a timbale of romaine lettuce
stuffed with sweet sauteed onions and leeks, thyme from my garden, raisins and chunks of my sour dough bread. I blanched separate lettuce leaves and shocked them in ice water to stop the cooking and to keep the color bright. I buttered ceramic cups and layered the leaves against the sides, leaving some hanging over the edge to close over the stuffing. I packed in the stuffing and baked them in the oven. I made a stock from the scraps of lettuce and added the reduced raisin soaking liquid, and some pomegranate syrup I made to use for the dessert later. When it came time to serve I heated and unmolded the timbales of lettuce onto the plate I added the raisin liquid and the fresh heated cream to
the plate. I decorated with chiffonade ( thin strips )
of lily, white and pink rose and parsley. 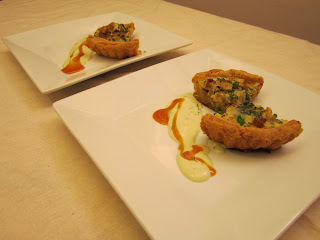 Nice vegetable tarts, with chard, eggplant and sweet banana were the third course. I blanched the chard, deep fried squares of eggplant and cut pieces of fresh, sweet banana. I made a custard from 3 eggs and a cup of cream mixed with some milk ( to lighten the custard ) tarragon, nutmeg and thyme. I used a nice unsweetened pie dough and put sauteed onions and leeks in as well. I had some Spanish sheep cheese called I diazabal hanging around in the fridge, so I put that in too. I thinned some goat cheese with cream and used that as the sauce. I made some orange syrup, with which I decorated the goat cheese cream sauce. It was a  tart and refreshing foil for the cheesiness of the dish.
Lime Sorbet was served after the veg tarts. I have a marvelous Lello Musso brand Ice cream maker from Italy, which I fell in love with when I was pastry chef of the Lighthorse Tavern here in Jersey City. They still have their machine, I purchased my own. Sorbet is made with fruit juice and sugar syrup. I make the syrup with half sugar and water. For a lime or lemon sorbet, or the wonderfully sour passion fruit, I squeeze the fruits and use it in equal proportion to syrup. I always check before spinning in the ice cream freezer to make sure it is not to tart or too sweet. The recipe of 1/2 cup juice, 1/2 cup syrup is just a guide. 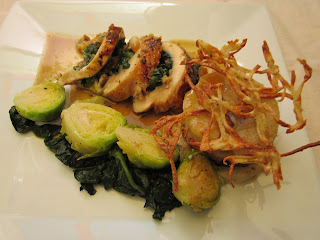 The main course was capon, stuffed with onions, leeks, goat cheese, and spinach. This was served with potato galette and brussels sprouts.
I called my butcher ( Ottomanelli's in Greenwich Village ) and ordered the capon and what is called a soup hen, or fowl to make the stock. The older the bird, the better. I made the stock overnight, at a heat so low that the liquid barely moved. There was just a single bubble or two slowly making its way to the surface. When you do this the stock does not acquire a muddy, overcooked taste redolent of the hapless disintegrating vegetables which boiling for extended periods produces. The meat ( and veg ) can then be used for something else, in my case I made creamed chicken from the dark meat and used the now too dry breast meat for cat food. The slow 'shimmering' method also produces clear, clean stock, with a minimum of sediment which can be used to make clear bullion and consomme.
I pounded the breasts of capon flat after removing the tenderloins and extra meat ( capons are huge ) which I reserved for another purpose. I kept the skin on. I then first added blanched spinach, layered on sauteed onions and leeks, and then herbed goat cheese. I tied them like a roast with butcher's twine. I sauteed them in olive oil, adding whole butter to make them a deeper and more delicious caramel brown. I added some stock and cooked them slowly in the oven for perhaps ten minutes. They are then put aside to rest so that they can 'bloom' to doneness. People invariably overcook poultry. They are well intentioned, but do not realize that if the thermometer stuck into a chicken reads 185, by the time it rests before serving it will be well over 200.  The cooking times given in books are just plain wrong. Poultry is way overcooked at 185, or 165, the temperatures most books and recipes recommend. Of course this is a matter of preference, and I prefer the the meat of the capon to be slightly blushed with pink. The saute gives it quite a jump start, the meat is no more than a half inch thick, so no more than ten minutes should be allowed for finishing the roulade ( roll ). There is also no way you can stick a thermometer into less than 1/2 an inch of meat and get a reading, so it is better, using intuition and practice to err on the side of caution and take it out to soon. You can always cook it a little more. I then added all the pan drippings to the reduced stock and when it was nice and thick, not syrupy, I added fresh whole butter and boiled it briefly to mount the butter. The slices of roast were then sauced with this ambrosia.
I sliced some unskinned russet potatoes and coated them with melted butter, nice olive oil, herbs, salt and black pepper. I layered them in a casserole and added some cream and baked them covered until they offered almost no resistance to a knife blade inserted into them. I then browned them under a broiler. This step was done the night before the dinner to let them set. before serving I cut little towers from the casserole and placed them on a tray to which I added some cream a baked them to heat them up.I then grated some potato into long skinny strips with a tool designed for that purpose ( a Japanese mandolin works too ). I added salt and pepper, and some corn starch and layered them onto my waffle iron to make the fantasy shapes seen in the pictures. I blanched and sauteed the brussels sprouts. 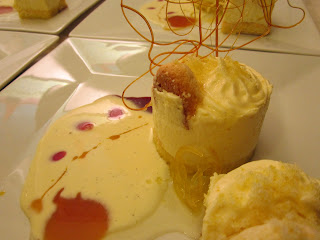 I made what is known as a lemon curd using the juice, and rind of 3 big lemons ( I added a little extra juice, ) 8 egg yolks and a cup of sugar. I cooked this over a double boiler for about half an hour. When cool I whipped a pint of heavy cream mixed with a 1/2 cup of 10x sugar and folded it into the curd. I made lady fingers and lined the molds I was using with them. I soaked the ladyfingers with lemon syrup and piped the cream into the molds. I put them in the freezer as this is a 'semi-fredo,' or partly frozen dessert.
Now for the garnishes:
I combined sugar and corn syrup and made a caramel which I then spun into art deco type garnishes.

I scraped lemon peel and added granulated sugar to it. I call this fairy dust in my kitchen.
I made candied lemon peel and stored it in lemon syrup. I did the same with oranges sent to me from White Flower Farms.
I made a syrup from pomegranate juice.
I had on hand, in my freezer what I call paint. There was reduced passion fruit puree, and also some fresh plum puree that I had left from making plum tort for someone.
At service I removed the Lemon Chiffons from the freezer and freed them from their molds using a knife blade dipped in water. While I did the decorating, and photography, they thawed to their semi-frozen state which is the perfect temperature for enjoying them.
Disclaimer: heavy cream, my preparation of goat cheese and herbs, plus my mixture of onions and leeks were used in no less than three of the menu items. One is taught not to do this in schools and in kitchens but again I often break the rules with excellent results, and I prefer to think of using these delicious items as recurring themes like the ones used throughout various movements in a composed symphonic piece of music or an opera. I like to think that my hero, Giacomo Puccini would have enjoyed this menu, and would have approved my use of recurring themes. 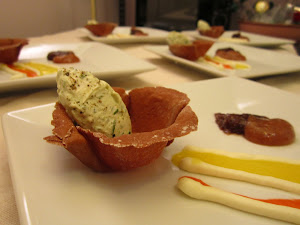